When we moved to this great city, we expected to see new things and meet new people. What we didn’t anticipate was that we might become new people.

Please don’t be alarmed. I’m not talking about plastic surgery, or about any upending of character or values. I’m talking about small shifts in what we choose to do, how we opt to spend our time.

Here’s what I mean. Back in London, L1 was not a shopper.  If the trend over the past decade has been towards men making up at least fifty percent of supermarket traffic, L1 hasn’t been part of that trend. He’s been the anti-trend. And yet, within days of moving to Manhattan, he transmogrified into someone who positively embraces the supermarket shopping experience. Could he possibly pop into Morton Williams on his way home from work to pick up some milk and broccoli? No problemo. Does he want to accompany me to Whole Foods on Saturday morning to pick up some grass-fed beef for dinner, and the other twenty items we need for the week? Nothing would give him more pleasure. I’m enjoying this new supermarket persona, but every now and again, catching sight of him wheeling the trolley through the fresh produce aisles or testing the ripeness of an avocado, I have the odd sensation of wondering who he is and what he’s done with my husband.

END_OF_DOCUMENT_TOKEN_TO_BE_REPLACED

“They’re not shy about using their horns in this city, are they?” L1 said on our first morning in the new apartment, as we craned our necks in the direction of the TV so as to hear Morning Joe over the vehicular argument that was gathering both pace and volume outside, five floors below.

“This, of course, is why a balcony is a complete waste of time in New York,” he added, clearly congratulating himself on having had the good sense not to pay whatever extra sum might have been required to secure an apartment with six square feet of precariously suspended outside space.

It occurred to us then, as it has almost every day since, that Manhattan actually has two great symphony orchestras. There’s the one that plays in the David Geffen Hall at the Lincoln Centre, the NYPO (New York Philharmonic), 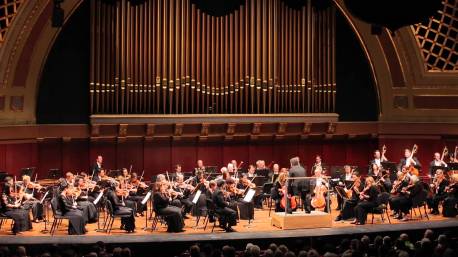 and then there’s the one that plays on the streets.  The street symphony’s illustrious composer is not Mozart or Brahms,  but the combined comings, goings and inclinations of the millions who live, work and drive in the city.

Ordinarily it’s the string section that reigns supreme, with the leading first violinist being the undisputed concertmaster. But in the street orchestra, it’s the brass section that takes centre stage. The constant honking of horns by taxis, cars and giant SUVs forms the very core of the score in this city – mostly trumpets, French horns and trombones, with the occasional stupendously loud report from a tuba. (That would be a super-sized truck making its impatience known.) END_OF_DOCUMENT_TOKEN_TO_BE_REPLACED