L1 had warned me that New York doesn’t really do Spring. You can be catapulted straight from the icy winds of bleak mid-winter into the intense heat and blazing sun of summer in the blink of an eye. Straight from winter woolies to sundresses without even a nod to the light weight blouses and the perfect-shade-of-taupe raincoat you’d purchased for all those in between days.

And that’s exactly what happened this week.  On Monday it was 46 degrees, with a bone chilling wind and steady rain all afternoon. L1 came home soaked through and grumpy, declaring that he’d just had just about enough of  the New York weather. I hadn’t even bothered to go out at all. I was still sulking about having had to leave the dolphins and pelicans behind at Casey Key. Anyway I had two cases to unpack, a shed load of washing to do, and an apartment to clean (Remember that New York dust I told you about? Imagine how thick it was after a month away). I couldn’t have gone out into the cold if I’d wanted to.

Then on Tuesday the temperature soared to eighty, where it stayed for the rest of the week before hitting ninety on Thursday. And with the tropical temperatures came a transformation, as if the city had emerged from its cocoon. People were suddenly smiling and talking to one another in the lift. Having spoken to precisely five people in our building since November, I spoke to five at once on my way down on Tuesday. An elderly woman announced, by way of warning, I supposed,  “It’s very warm out there.” Her husband concurred eagerly. Another woman entered the lift on the fourth floor wearing a long rain coat and with a pile of clothes over her arm.

“Suddenly we’re all going out!” said the first woman.

“Yes! Well, I’m only going to the valet to drop these off for dry cleaning,” said the rain-coated fourth floor dweller. “But it does look fabulous out there. I’m packing up the apartment. And I’m wearing nothing but long underwear underneath this coat!”

Maybe a little TMI, but it certainly broke the ice. The elderly couple were keen to know about the packing up.

“I spend half the year in Rio,” the woman explained. “I’m leaving tomorrow.”

Bad timing, I thought. Just when the tulips are coming out. And the tulips are everywhere. There are red and yellow ones carpeting the grounds of our building, and red and white ones under every tree I pass on my way to Madison Avenue.

It’s not just the chatty neighbours and the tulips brightening up the place. The streets now abound with pretty Chanel pumps, striped espadrilles, handbags in mellow yellow and cerulean, floaty floral sundresses and chic linen trousers. Fashion, in general, has come out from under its winter duvet. People don’t bother so much in the winter, or if they did, we wouldn’t see it anyway. We all look the same, in our hooded puffa-coats in various shades of black.

The dog lovers are out in force too. Usually it’s just me bending down to say hello to other people’s dogs, but yesterday I saw others doing the same. It’s as if the warmth and sunshine has melted away all the barriers that normally exist between people in this city and softened the stiffness that passes as discretion. People talk in louder, more excitable voices instead of huddling up against the cold. They gesture, look up and around, and smile.

I know that the residents of any country that has a winter will be celebrating the springing of spring. But I wonder if the transformation in people’s moods and behaviour is more marked when the winter is brutal, as it is in New York. I think that in the UK we get so used to the grey skies and drizzle all year round (except for about a week in June) that we just carry on, not much remarking when the weather shifts. In a place like New York, the contrast between winter and spring/summer is so dramatic that it seems to jolt people into a whole new way of being.

In this weather, I no longer want to sit inside Shakespeare and Co, so I’ve switched my writing spot to the open air Pain Quotidien which sits on the shores of the lake in Central Park – the one with the Stuart Little boats. It can be difficult to find a table in the shade, but when you do, it’s bliss. 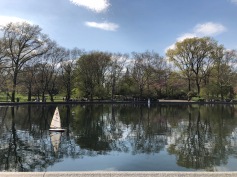 It wasn’t so blissful in the Arthur Murray Studio on Thursday, where the air conditioning did little to combat the ninety degree heat. Our instructor, (whom I think I once called Louisa, but who is in fact called Jacqueline) took L1 and I through some challenging swing steps that had us both dripping inelegantly within minutes.  My hair was so damp and flat I looked as if I’d been caught in a rainstorm.  It was not a pretty sight. As we left the studio  I reminded L1 that this, of course, was the primary reason I would never be able to appear on Strictly.

But it wasn’t as hot in the Arthur Murray Studio as it is in the basement of our building, where the maintenance guys are stationed. Terry came up on Thursday to sort out a ceiling light that was misbehaving, and I asked him how it was down there in the bowels of Manhattan House.

“No air conditioning down there,” he said in his Irish slash Brooklyn accent. “And we have to keep the heatin’ on because, ya know, it’s going to go down below fifty at night next week. So we gotta protect the pipes.”

“You must be dying down there,” I said.

He shrugged. “We’re used to it. New Yawk is like that –  goin’ from winta to summa in one day. Boom! Waddabout spring?!  It’s crazy.”

I’d felt a little sheepish about dragging him up to attend to a ceiling light that I should probably have been able to fix myself, but then I realised that I’d actually done him a favour. I’d given him an excuse to escape the inferno for ten minutes. And he must have had thirty or forty of those excuses that day, because he actually looked quite fresh in his crisp white shirt. His hair was certainly in better shape than mine had been after an hour in the Arthur Murray Studio.

Also, of course, he could count on the inevitable tip to lessen his pain. After I gave it to him, he positively skipped towards that lift.

View all posts by jrbinmanhattan

One thought on “Waddabout spring?”